When you book with an account, you will be able to track your payment status, track the confirmation and you can also rate the tour after you finished the tour.
Sign Up
2443

Explore the stunning Algarve coast on a full-day tour from Lisbon. Head south to Lagos and explore the famous caves of Piedade, with the option to take a cave tour by boat. Then head to Portugal’s southernmost tip, Sagres, to visit the St. Vincent lighthouse and Sagres Fortress. Take in the beautiful coastal scenery throughout the day and enjoy informative commentary from your guide. Explore the Algarve coast on a full-day private tour from Lisbon Discover the caves of Piedade in Lagos, with the option of a cave boat trip Visit the southernmost tip of Portugal, Sagres, and its fortress Customize the itinerary to your interests and desires.

We’re specialized in services and unique travels experiences in Portugal. Our experience is your garantee that we understand, meet and exceed your expectations. We invite you to experience the authenticity of a full day tour through Lagos and Sagres.

Portimão has a long fishing tradition that developed particularly between the 19th and 20th centuries with the advent of the canning industry and tourism. Most of the buildings that you see in the streets and squares of the historic centre are from this period, as well as the building that houses the Portimão Museum, a superb refurbishment of an old cannery that received the Museum of the Year award from the Council of Europe in 2010. It pays homage to the people and the city that for centuries have lived exclusively of and for the sea.
You shouldn’t miss the simply styled Chapel of São José de Alcalar or the impressive Church of Nossa Senhora da Conceição (Our Lady of the Immaculate Conception), built in the 15th century on top of a hill, and standing out in the city’s skyline; it was badly damaged by the 1755 earthquake, but retains its beautiful original Gothic portal. For a break in your meanderings, it’s best to rest in the shade of the trees of the Manuel Bivar Garden to see the fishing boats and pleasure craft sail past. Or on the promenade beside the Marina, one of the liveliest parts of the city both by day and by night.
The Praia da Rocha Fortress provides today an excellent view over the city, the river and the sea, which acquires a special charm in the evening, in the light of the setting sun. From here you can also catch sight of some of the beaches to the west, beginning with the Três Castelos Beach. Some smaller, others larger, but always framed by jagged rocks that embellish the landscape, here you’ll find Careanos, Vau, Barranco das Canas, João d’Arens, Prainha and Três Irmãos beaches. This sequence ends at the long sandy beach of Praia do Alvor and its estuary, an area of lagoons important for aquatic bird watching.
Duration: 2 hours

Located by the mouth of the Arade river, Rocha Beach extends over a huge area of sand some 3 kilometres long irregularly broken up by odd rock formations that the sea has been carving out throughout tens of thousands of years.

Regularly the chosen location for Algarve tourism publicity photographs and highly publicised in international campaigns, this is now one of the most popular resorts in southern Portugal. This is further encouraged by the range of nightlife that even boasts its own Casino.

Bathed by a calm and warm sea that provides for risk-free swimming, Rocha Beach is also equipped with the facilities for a number of different sports including basketball, football, volleyball and aerobics.

Lagos has a long history linking it to the sea. Its original name, Lacobriga, reflects the fact that the first inhabitants of this port, in roughly 2000 years BC, were of Celtic origin. After them came the Phoenicians, Greeks and Carthaginians, but it was the Romans that brought growth and prosperity to the town. The Moors built walls around Lagos in the 10th century and gave it the name of Zawaia. They remained here until the town was conquered by the Christians in 1249 and became part of the Portuguese territory.

The 15th century was the golden age for the town of Lagos, with its immediate involvement in the period of the Discoveries. Due to the port’s location, directly across from Africa, it became the major point of departure and arrival for the ships that, year after year, set sail in discovery of that continent. As an important trading centre for a range of exotic products, including the ivory, gold and silver brought from Africa, Lagos saw a dramatic increase in the number of its houses, traders and monuments at that time.

New walls were built in the 16th century to keep pace with the city’s expansion, and, from 1572 onwards, Lagos became the see of the bishopric and the official residence of the governors of the Algarve. These defences were further strengthened in the 17th century with the building of a series of forts at strategic points. The earthquake of 1755 and the seaquake which followed it destroyed a large part of the city, which only began to recover its prosperity from the 19th century onwards, with the introduction of the canned fish industry and the consequent increase in trade. Today, Lagos is a dynamic and active city, which is justifiably proud of its past.

Then head to Portugal’s southernmost tip, Sagres, to visit the St. Vincent lighthouse and Sagres Fortress. Take in the beautiful coastal scenery throughout the day and enjoy informative commentary from your guide.

The village of Sagres was rebuilt on the ruins of the 1755 earthquake – with the port over southwestern continental Europe, where fishermen still sell their catch from the three o’clock in the afternoon, Monday through Friday. The Algarve has earned a reputation as one of the best surfing locations in Europe, in Sagres one of its central points. Its position at the bottom of Portugal means there is almost always excellent surfing conditions. The main street – Rua Comandante Matoso – switches the fishing port and beach of Whaling at one end with the main square, all supported by a new urban area of villas and apartments. Nearby are the ruins of the Fort of Whaling (XVI) damaged by British privateer Francis Drake, 1587, when Portugal was temporarily attached to Spain, and therefore went from ally to enemy of England.
Duration: 1 hour 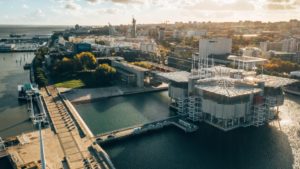 The scenery was outstanding. The food in Algarve is also amazing.